Bloggered!
Earlier today, a popular international blogger  from Sheffield was trampled
to death by a frisky herd of young Jersey cows as he was walking across a field
at Stancil Farm north of  Tickhill, South Yorkshire.
Known as "Yorkshire Pudding", the 67 year old blogger was lawfully walking
on a designated public footpath when the forty strong herd came thundering
across the field towards him.
He yelled at the young cows and waved his arms but they were not in the mood
for mercy. They surrounded Mr Pudding nudging him and pushing heavily
against him until he stumbled and fell to the ground.
The leader of the assailants was a deranged cow called Buttercup who was
the first to tread upon the retired teacher bringing her full weight of
approximately 70 stones upon her screaming victim's chest.
The other cows followed Buttercup's example and a few minutes later
Mr Pudding breathed his last breath.
Owner of the herd,  Farmer Boris Hogg of Stancil Farm  said, "I was having a
mug of tea and reading my "Farmer's Weekly". I didn't hear a thing."
Senior Ambulance Woman, Dolly O'Toole (aged 34) attended the tragic
scene an hour after the event and later said that Mr Pudding had been
"flattened like a pancake - or to be more accurate like a Margherita pizza."
Yorkshire Pudding leaves a wife, son, daughter, son-in-law, two brothers
and a baby granddaughter called Phoebe - along with thousands of
grieving supporters and heartbroken friends from across the
world of blogging. 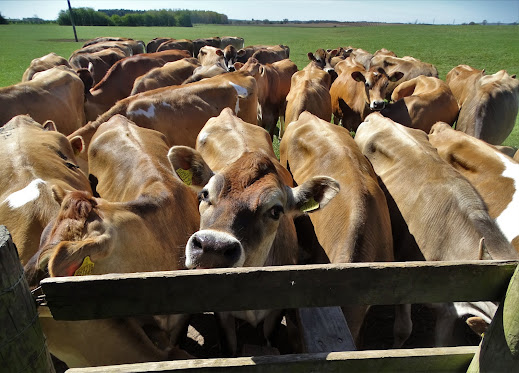