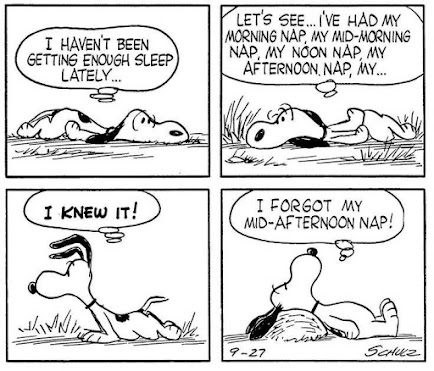 In my mind I have an image of my parents in their late middle age. It is some time in the mid-seventies. We have had our evening meal and the television news is on but they are paying no attention to current affairs because they are both asleep. Mandibles relaxed, they have for a little while at least, escaped from consciousness. They're sitting in their armchairs - napping.

Now I dislike napping and try to avoid it as much as possible. For me napping is annoying because it tends to spoil my appetite for proper sleep when I finally get to bed. This is especially so late at night.

In recent weeks, I have found myself napping on several occasions. I will be watching something on the TV with my eyes getting heavier and then, gadzooks - I am asleep just like my parents. Sometimes, half an hour or more will pass before I wake up, bleary-eyed wondering how I have missed a big chunk of the show I was watching.

Every time I have ever napped it was unintended and undesired - possibly with the exception of air travel. Napping seems to happen when you have had an active day and  you're warm, safe and comfortable. You don't mean to give in to sleep but it takes you anyway.

Later you may find yourself tossing and turning in bed, your head buzzing with thoughts as you are refused entry to The Palace of Sleep. The dreaded nap has taken the edge off your tiredness and you may have to get up, have a hot drink and a biscuit (American: cookie)  and do some pottering about before giving proper sleep another go.

Most of my life I have happily avoided napping but as I say, in recent weeks, I too have fallen victim to the sly, creeping condition on various occasions. Perhaps somewhere, ingenious immunologists are developing vaccines to defeat NAP-21. If so,  I will have some of that.  Napping is, in my humble opinion, the secret scourge of the western world.