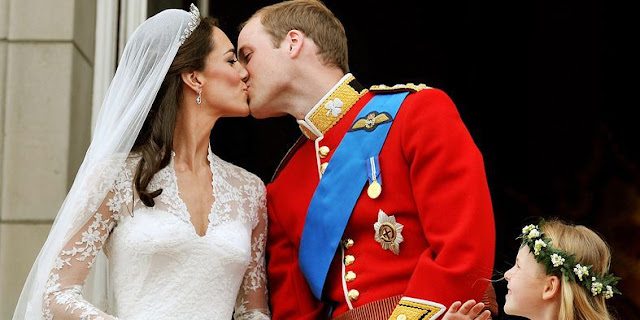 A decade ago today, I was sitting in my lovely "Lotus Room" in northern Bangkok watching live television. I had turned the magic box on because I wanted to watch the wedding of Prince William and Kate Middleton. It was a happy, joyful event beamed to me from London on the other side of the world.

Today we are all ten years older. Normally it is hard to track the aging process after just one year but a full decade is different. Hair is perhaps lost or greyer, eyes become more tired, lines start to form, girth may increase. A decade's worth of old people will have died as a decade's worth of babies arrived to take their places. A kind of shunting along.

Prince William still seems like a really nice guy. You can see it in his eyes. There is an earnestness about him and an innate dignity. He really cares about the plights of less fortunate people. In  Catherine he found a lovely, intelligent  spouse who understands what duty means. So different from the other two who shall not be named. You know who I mean.

April 29th 2011. There was no expectation of a deadly worldwide pandemic. No idea that America would put the self-obsessed host of "The Apprentice" in The White House with his fake hair and fake views. No thoughts of "TikTok" or Ed Sheeran or Tesla cars or Greta Thunberg. Our daughter Frances was just finishing university in Birmingham and our son Ian was still slaving away in men's fashion retail. Shirley and I had not been to New Zealand or The Pacific North West or Malta or Garlieston in Wigtownshire and I had not yet begun working at the Oxfam shop where I put in  over five years of service. A full decade of life. So much water under the bridge.

In April 2011, the population of  our planet was  almost exactly 7 billion. Today Earth's population is 862 million bigger - 7,862,293, 428 as I type this full stop>.  When will this endless population explosion be meaningfully addressed?

What were you doing a decade ago and how has your life changed - just as William and Catherine said - for better or for worse?