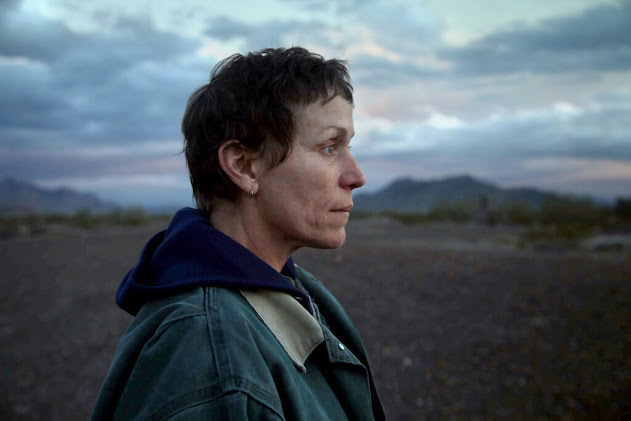 One of the things I love most about this life is that there's no final goodbye. You
know, I've met hundreds of people out here and I don't ever say a final goodbye.
I always just say, "I'll see you down the road". And I do. And whether it's a month,
or a year, or sometimes years, I see them again. -  BOB WELLS in "Nomadland"
Finally, I got to see "Nomadland" yesterday afternoon at The Showroom Cinema in the centre of Sheffield. The last film I saw in a cinema was "Parasite" and that was back in February of  2020.
I watched "Nomadland" in silence with my friend Mike. As we shuffled out of the darkness during the final credits, I agreed with him that it had been a great film - captivating and beautifully constructed. We were not disappointed - quite the opposite in fact. It was quietly joyous - a celebration of life in spite of the central theme of poverty and displacement - modern American "nomads" living on the fringes of  normal society.
The central character is Fern played by Frances McDormand. When her husband died, she remained in the remote Nevada mining town where they had spent all of their married life. However, finally she ended up in a small camper van seeking seasonal work and solace in the great American wilderness.
Brilliantly directed and edited by Chloé Zhao, "Nomadland" is not laced with the anger and resentment one might have anticipated. People get by and get along. They do not really blame anybody else for the situations they have found themselves in. Two other things I loved about this film were the beautiful imagery of the west and the fact that the cast included a number of travellers that the filmmakers encountered along the way - true life American nomads  like Swankie, Linda and Bob. They added to the film's aura of authenticity.
There was no killing. No drunkenness or cop cars or wily detectives. It was a quiet and lovely film about outsiders and Frances McDormand was superb. It is easy to see why "Nomadland" has  achieved so many awards - including "Best Picture". Richly deserved in my view.
- May 22, 2021