We have lived in this house for almost thirty two years. In all that time, I have been a regular at our local pub. Of course, COVID-19  has had a big impact on English public houses. Until very recently our local had been closed  for many months. Three weeks ago it opened for outside drinking only but on May 17th customers were allowed to go back inside. No waiting at the bar. Table service only. Hand sanitising. Masks on when not at your pre-booked table. Such fun! 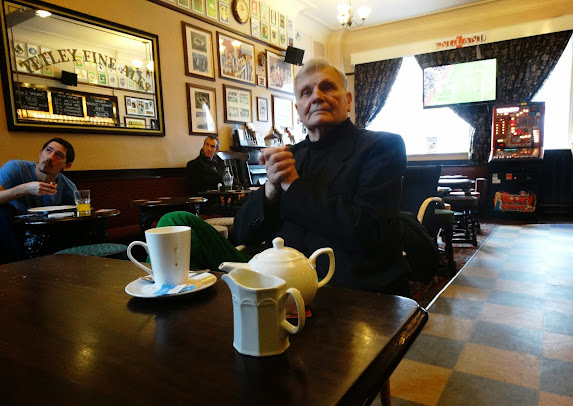 Last night I moseyed on down there for the first time in a year. I met up with five other regulars - all retired folk like me. I have known them for years and we have  seen that pub pass through several changes - including refurbishments, management comings and goings, deaths of other regulars and the sad decline of pub attendance in this country.

I remember the pub being packed to the rafters on Friday and Saturday nights. It was hard to find a seat sometimes. The air would be a fug of cigarette smoke, filled with lively conversation and raucous laughter. When we first moved to this suburb, there weren't even any televisions in the old place - just a piano which apparently, before my time, used to be the focus of Saturday night sing songs.

Shirley and I have spent several happy New Years Eves in the pub and we have attended a number of wakes there too.  It is where I honed my quizzing skills on Tuesday and Sunday nights. Generally speaking, the atmosphere was always pleasant and unthreatening in this law-abiding neighbourhood but I have seen a couple of fist fights in there - like scenes from The Wild West - though they never lasted long.

Just before the pandemic the old days were long gone. Before closing time most tables would be empty and the careless young bar staff were often in a rush to stop serving and get customers out. It was putting me off going there any more and it felt as if the pub was dying before my eyes. Metaphorically speaking, it was becoming like an old western saloon in a dusty ghost town with the tumbleweed blowing past.

And so I was back in there last night. A slim young woman with long dark hair was taking our orders. I asked what her name was and she said, "Alice".

"Welcome to wonderland!" I said and she chuckled under her black coronavirus mask.