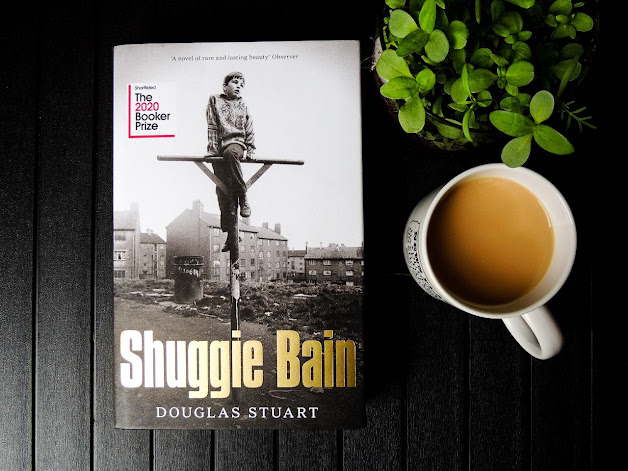 Earlier today I sat out on our decking and finished reading "Shuggie Bain" by Douglas Stuart. This earthy novel was last year's Booker Prize winner. It was a book that I really warmed to as I kept turning the pages. The strapline on the front cover reads, "A novel of rare and lasting beauty" and I must admit that at first I could find little to support that claim but by the end I could see where "The Observer" reviewer was coming from.
Set in the mean streets of Glasgow, the novel is semi-autobiographical. Hugh Bain, known universally as Shuggie,  is an effeminate boy who loves his mother Agnes fiercely in spite of her alcoholism and the many issues that this causes.  Life is hard.  There's rarely any food in the cupboard and Agnes is seldom at peace with herself, her relations or her community. It is as if Shuggie has to constantly walk on eggshells.
The dialogue successfully captures the rough voice of working class Glasgow as once proud industries have declined. There are pubs and cigarettes, electricity meters to prise open, violent rows to be had, bingo halls and betting shops to visit, cans of strong lager to be hidden.  Of course such a life is especially challenging for an intelligent boy who is confused about his sexuality, only gradually realising that he is gay.
To give you a feeling for the language of the novel, here are a couple of extracts. This is the voice of one of Agnes's  male  friends - Eugene:-
“Ah have been lonely fur years now. Lonely long afore ma wife died. Don't get us wrong. She was a guid wummin, a guid wummin just like our Colleen, but we were jist stuck in our wee routine. When ye think about it, ah've been under the ground most of ma life. There wasn't much in me for sharing at the end of a day. After twenty years, what do you talk about? But she was a guid wummin. She used to make me these big hot dinners, with meat and gravy, the plate scalding hot cos she'd warm it up all day in the oven. We ate big hot dinners because we had nothing left to say. Nothing worthwhile anyway. Ah'm forty-three. That's four years older than when ma father died, so I should've been done. I should've been retiring from the pits, living the rest of ma days out with her and with nothing to say. When I saw ye I wasn't looking. I didn't know of you then, hadn't heard our Colleen lift your name. That's wummin's stuff, isn't it? They don't talk to the men about that. Gossip. Telling tales. Chapel. That's their club. All I know is when I saw you sat behind that glass, I saw someone lonely too, and I hoped we might have something to say to each other. I realised then. Ah don't want to be done.”
And this is  a short glimpse into what Shuggie's mother Agnes was like:-
“She was no use at maths homework, and some days you could starve rather than get a hot meal from her, but Shuggie looked at her now and understood this was where she excelled. Everyday with the make-up on and her hair done, she climbed out of her grave and held her head high. When she had disgraced herself with drink, she got up the next day, put on her best coat, and faced the world. When her belly was empty and her weans were hungry, she did her hair and let the world think otherwise.”
In the end I was very glad that I decided to read "Shuggie Bain". Its author, Douglas Stuart, now lives in New York City where he has worked for several years as a fashion designer.
At my Scottish university I had a friend from Kilmarnock called Hugh Lynch. We all knew him as Shuggie. Co-incidentally, because of alcohol, his life spiralled out of control and he died in Glasgow in the mid-eighties.  Another  tragic waste of a life .
My final point is about proof reading. I found several grammatical errors in this much lauded   novel.  For example "retch" -  as in vomiting - was written more than once as "wretch". Perhaps publishers place too much store in computerised spell checking software these days or employ proof readers who no longer have an eye for close detail.
- May 02, 2021