Earlier this year, after browsing through computer photo files, I blogged about two years in my life: 2007 and 2008 Today it's the turn of 2009 - twelve years ago now. That was the year I fulfilled a long held dream - to visit Easter Island but more of that in tomorrow's blogpost.

The photo files remind me that in the middle of  that year, Shirley and I  visited Sussex on the south coast of England. We had three days at "The Dorset" - a public house in Lewes, near Brighton and then a week in an apartment in the charming seaside town of Rye. From there we strayed over into Kent, visiting Dungeness and Canterbury.

As I recall, it was a lovely holiday - exploring a part of England that was unfamiliar to us in nice August weather.  Looking back, I regret that we did not visit the comedian, Spike Milligan's grave in Winchelsea near Rye - simply because at the time I did not know he was buried there. These three images must suffice to represent that happy vacation:-

"The Ypres Castle Inn" in Rye

The 2009 photo files remind me that we visited Hong Kong at Eastertime. We were there for nine days and stayed in three different hotels - one was on Hong Kong Island, another on  the island of Lantau - The Silvermine Beach Hotel and the third in Kowloon. Look at what has happened to Hong Kong since 2009. I don't suppose they receive many western tourists nowadays. I am glad we went when we did.

There's a very long escalator on Hong Kong Island. It takes you up the hillside from the area known simply as "Central" to the Mid Levels. In fact it's twenty separate escalators all in a row. As we were going up we were stunned to see a new cafe/restaurant called "Yorkshire Pudding".  Of course, we had to pay it a visit and co-incidentally arrived as a  local newspaper reporter was interviewing the owners. It wasn't long before they roped me in too.

The place we stayed at in Kowloon was called "The Luxe Manor" and it described itself as "a boutique hotel".  It was a lovely establishment, spotlessly clean and decorated very idiosyncratically. I remember how friendly and helpful the staff were. They ordered a taxi to take us to the airport terminal and when it arrived I swear that half a dozen smiling members of staff stood in line on the pavement to wave us off. It is an image I will never forget. As they waved us away, we briefly felt like foreign dignitaries or rock stars.

Here are three images to represent our  happy holiday in Hong Kong:- 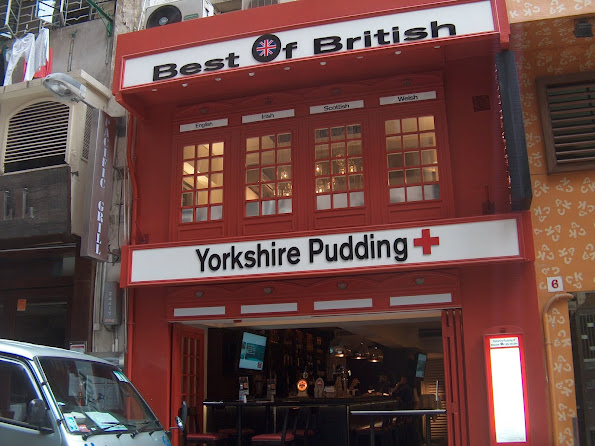 "Yorkshire Pudding" halfway up the escalator 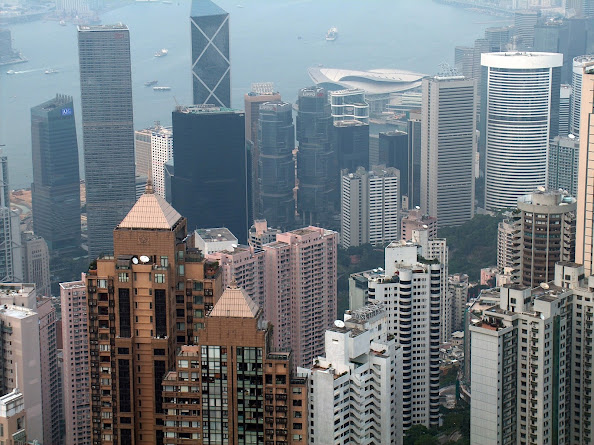 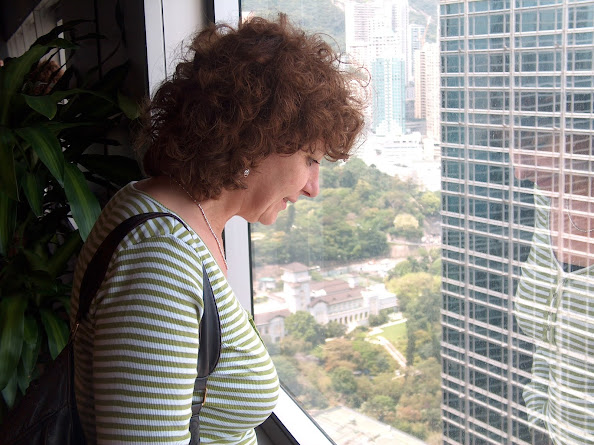 Shirley near the top of "The Bank of China" skyscraper
Tomorrow, it's back to Easter Island.
- November 08, 2021