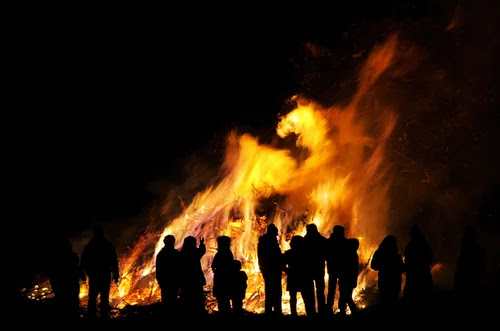 Well finally I had my COVID19 booster jab today in a church hall connected to St Peter and  St Oswald's Church  on Abbeydale Road. The vaccination  centre seemed to be staffed entirely by people from South Asian and African communities. Not all of them spoke English fluently and comprehension difficulties were exacerbated by the masks they were wearing.

After my jab I had to sit in the waiting area for fifteen minutes with others who had just been vaccinated.

A big man with a striped stick entered the vaccination centre. There were two young African men at the reception desk. The big man was asked for his name but with the African accents and the masks he didn't understand them at first. When the penny dropped he said in a booming voice, "I'M ALAN BIRD!" It echoed around the quiet church hall. Then because of some confusion, he bellowed even louder, "I'M ALAN BIRD!"

The young African said quietly, "You mean like a bird that flies in the sky?"

Alan Bird gave his date of birth - ten years older than me. Then he shuffled from reception to registration and on to the curtained booth that I had been in to receive my booster jab from a rather miserable South Asian nurse whose demeanour said loud and clear, "I am only here for the money".

After the booster, I went round to Frances and Stew's house which is very close by. Little Phoebe positively grinned when she saw me wander in. Almost ten months since she was born, she is just starting to crawl and she can now raise herself up to a sitting position. Her little fingers are able to press buttons in a targeted way to set off music in books or toys. Then she nods her head as she listens.

It has been lovely to observe her development. Somehow I had forgotten so much of that stuff from when Ian and Frances were babies. Time may possess healing powers but it also has the ability to blur our memories quite ruthlessly.

It was Guy Fawkes Night this evening - also known as Bonfire Night. Outside there were some loud bangs and rockets bursting in the sky causing sparkly fountains. But it's nothing like it was when I was a boy. Back then it was one of the best and most eagerly anticipated days of the year.

Lasting memories of it still make me smile. The "guy" being eaten by the flames. The jacket potatoes and the toffee apples. Pocket money fireworks coming out of their tins. The smell of gunpowder and the sense of danger as penny bangers exploded and catherine wheels span round madly on nails. You watched wild amber flames leaping high into the night sky and in the morning light you surveyed the still smoking embers of the bonfire and the spent remains of fireworks. Twelve long months later it would all happen again. Did we really have to wait so long?