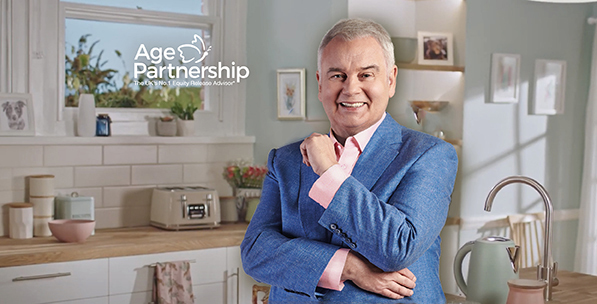 Eamon Holmes - British TV personality - and the smiling face of equity release
Back in May, 2015 I wrote about my friend Higgy and the issues he was facing regarding health, money, work  and I suppose life itself. Go here.

Roll forward six years and things are no better. He is sixty two now. Incredibly, he held a job down for two years - as a low paid carer attending to elderly people in their homes but he lost that job a year ago over some issue with documentation of visits undertaken.

In England, the long term unemployed are often pushed into basic jobs by a system that is unwilling to cough up benefits to those who have the capacity to work. It's all much tighter than it used to be and the unemployed are sometimes seen as idle layabouts who in effect are scrounging off the state.  That is how Higgy ended up as a carer when arguably he is someone who needs a carer himself.

I swear that no cleaning whatsoever has happened in his flat since I used to call in there to help Higgy with job applications and the negotiation of welfare hurdles. There are items on his coffee table that have not moved in seven years, including a leather diary that is covered with a 2mm layer of dust.

On another part of the coffee table, twelve  thin rolled up cigarettes were sitting in a line for later. That sitting room is stained brown by nicotine - even the Audrey Hepburn mirror left on the wall by the flat's previous owner. Higgy inherited all of her furniture, including the pictures on the walls, the bed. the carpets, everything  and he was never tempted to change a thing.

It's like a set for a television drama about a hermit-like fellow who was ignorant of the concept of cleaning. In the kitchen , toast crumbs gather like tiny tumbleweeds in an abandoned western gold-rush town and you wouldn't want to see the ceiling where the paint peels  like lines of surf upon an ocean.

Yet Higgy remains as bright as a button when it comes to current affairs and football. He retains so much knowledge, so many names and dates. Perhaps he is autistic but if he is it has never been diagnosed.

He doesn't go out any more because he has no money so he has decided to access a few thousand pounds through the equity release route. He seems to have no other choice and he has pressing debts to pay. Recently he has taken to staying in bed much of the day - just to keep warm. He is dreaming of three pints of lager beer in the local pub at lunchtime on Christmas Day.

In order to  release equity in his flat he needs witnesses and that is why I visited him yesterday with another friend who was also visibly taken aback by the state of the place. It is what my mother would have called "a pig sty". Even so I still like Higgy and I hope the funds come through soon to keep that damned wolf from his door.