Of course there are many useful environmental lessons that might be learned from reflecting  on what happened on Easter Island. The first settlers discovered a sub-tropical Garden of Eden - forested and green with multitudes of seabirds. There they might have made their own lasting earthly paradise but through ignorance and carelessness and other typically human traits, they gradually destroyed it till there were no trees left and the seabird population was decimated. When the first Europeans arrived Easter Island's heyday was long gone. Where once there had been forest there was now nothing but barren grassland.

"The Guardian" newspaper recently announced the winners in an international environmental photographer of the year competition, organised by environmental and water management charity CIWEM and WaterBear, a free streaming platform dedicated to the future of our planet. The awards celebrate humanity’s ability to survive and innovate, and showcase thought-provoking images that highlight our impact and inspire us to live sustainably. (Language from "The Guardian")

I have chosen two of the winning images to share with you, both are from Bangladesh.

In this drone image by Ashraful Islam, a flock of sheep at Noakhali seek water on the cracked earth. J guess there's an anxious shepherd under the umbrella. Though Bangladesh has often had to deal with terrible coastal flooding, in some inland areas droughts have become more frequent and basic survival more challenging:- 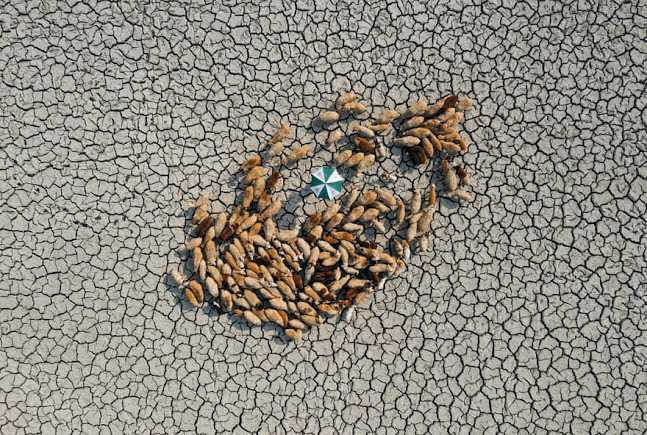 The second image is from Chittagong and it is by Subrata Dey. A little boy sits on a rough homemade ladder that reaches up a veritable mountain of used plastic bottles. Plastic recycling has become a significant industry in Bangladesh where much of the sorting is done by hand:- 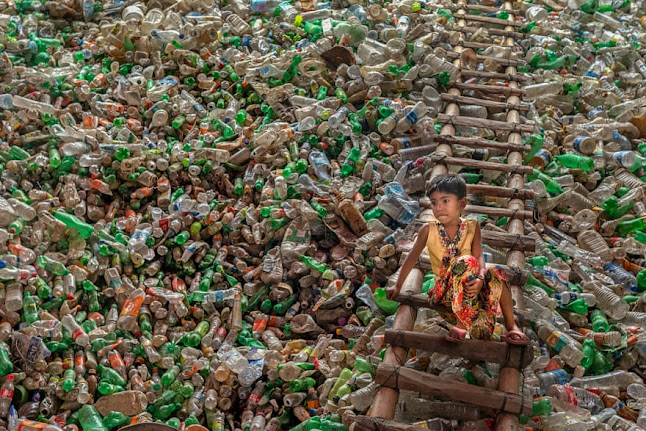 Shirley and I are pretty scrupulous about recycling plastics, tins, glass, paper and in fact anything else that might be recycled. However, I worry about where our stuff goes. The authorities seem to deliberately shroud their recycling procedures in veils of mystery. I fear that some of our waste plastic might be on that pile or on its way to Indonesia or Malaysia or certain African countries. This is a matter that COP26 might have addressed - to bring about recycling transparency and internationally agreed processes and rules. Sometimes you wonder if they really care.
- November 10, 2021