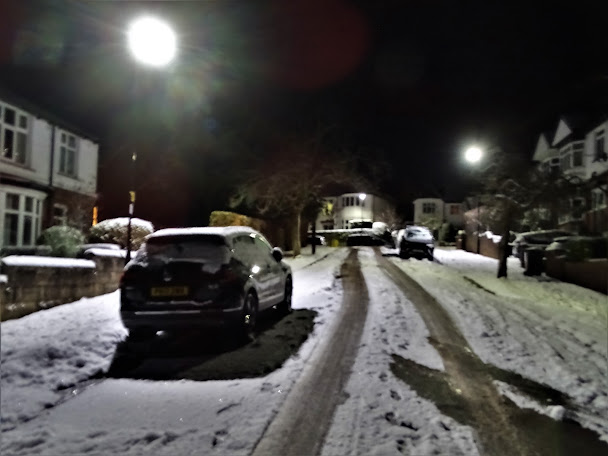 View up our suburban street five minutes ago at 11.05pm on Sunday night
Here in northern England, it had been an exceptionally mild autumn until this past weekend. I got up very early on Saturday morning - disturbed by an infuriating ticklish cough. I looked out on our back garden and noticed that there had been a light dusting of snow - like icing sugar sprinkled on a sponge cake.
I made a mug of tea and sat down in  the study with the desktop computer in front of me. I am sure you know yourself how easy it is to fritter away time when online. An hour later, I got up and went into the kitchen to check out the back garden once more. In that hour a couple of inches of snow had fallen - associated with Storm Arwen - the first named winter storm.
The decking furniture was thickly covered in the white stuff and so was the bird table. It was six thirty in the morning and snow was still whipping down. I went back to bed and with Radio 4 playing on the side, I managed to return to slumberland for  two more hours. When I woke for the second time, I looked out of the bedroom window and in the risen morning light revealed a veritable whiteout though by this time the feathery snow was no longer falling.
Clint was supposed to be driving me over to the city of Kingston-upon-Hull later in the morning - sixty miles from our house.  I was meant to join Hull City's small army of supporters that cheered the lads on to victory against Millwall from south east London. In the event, I decided not to go. Our street was snowy, I would have had to dig Clint out and with the ticklish cough and the broken night's sleep I was not in top form. So I stayed at home in the warm.
It's been the same today (Sunday). I have been housebound. The most I have achieved is making Sunday dinner for Frances and Stew who came over with the little princess in spite of yet more falling snow. Snow upon snow. They loved my dauphinoise potatoes. Maybe one day I will post my special recipe in this blog.
Little Phoebe's development is motoring along. When I managed to sit down in the front room for five minutes, she crawled over to me and pulled herself up to a standing position using my trousers to grip upon. Then I read her "The Three Billy Goats Gruff" for the umpteenth time before returning to my Sunday dinner preparations.
According to our digital thermometer, it's minus 1C now and I just popped out to take a photo looking up our suburban street. Brrrr!
- November 28, 2021