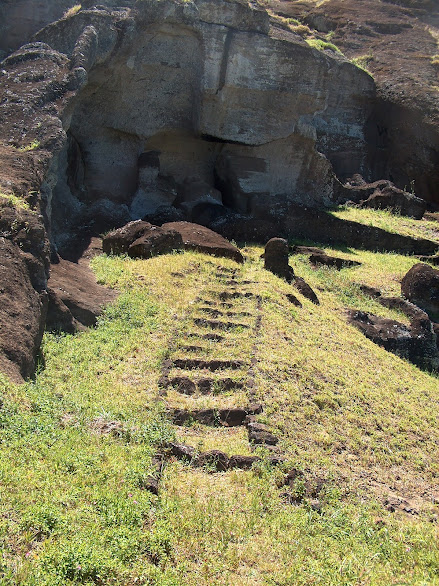 In the autumn of 2009 when I visited Easter Island, Chile and  western Argentina, I kept a diary. Had I read it in the last twelve years? I don't think so but today I dipped into it and about thirty pages in I discovered that I had attempted a poem while staying on the island.

Twelve years later I have reworked it slightly and given it a little spit and polish while retaining the sense that it was "of the moment" - inspired by being there on one of the remotest inhabited specks of land on the entire planet.

With such certainty
The stone adze struck
Unyielding tuff.
Sometimes the masons
Would wipe their brows
And survey the line
Drawn where ocean met sky.
Way beyond it,
Chinese potters made exquisite vessels,
Aztecs built Tenochtitlan,
Egyptians immortalised the Nile
And America sat unknown.
But here on the slopes
Of Ranu Raraku
They chipped away
Day by day
Making their moai
For the dead
And for the
Extolment of the living.
There was never a doubt
That's what life
Was all about.
28.10.09
NOTES
Rapa Nui = Polynesian name for Easter Island
tuff = a volcanic rock native to Easter Island.
Tenochtitlan = Aztec city now overwhelmed by modern day Mexico City. It was the largest city in the pre-Columbian Americas
Ranu Raraku = crater on Easter Island where nearly all the statues were carved
moai = the famous stone heads
Extolment = praise, approval and commendation 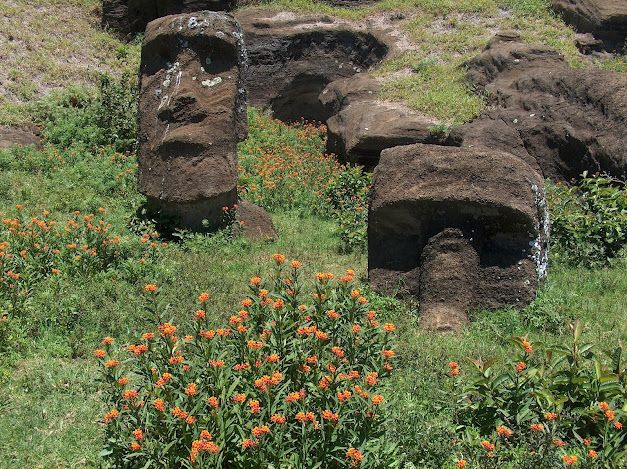 Moai inside Ranu Raraku crater - still waiting to be transported
This poem is, I think,  okay. I am glad I rediscovered it but maybe it's time to write another poem or two that reflect upon that faraway island and what it might mean.
- November 15, 2021