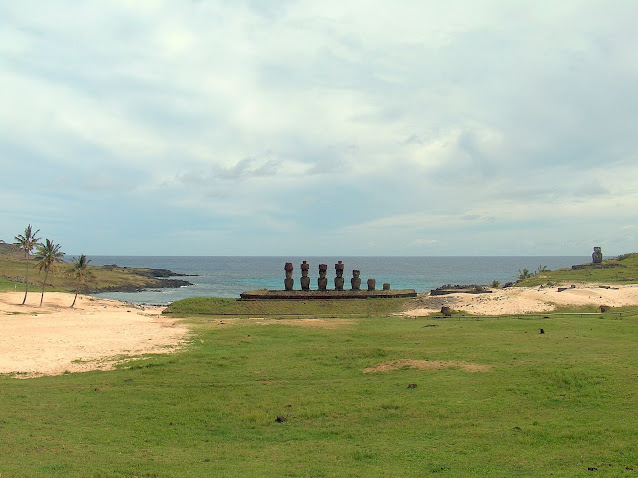 Dawn is breaking and I can hear cockerels greeting the day. Some are close by, others are faraway snd beyond those there are no doubt others. There's no clear "cockadoodle-doo" - nothing musical like that, these rooster calls are pained and varied as if appealing to some unmerciful god.

Nearer are more melodic songs from small birds. How did they arrive -here - 2500 miles from anywhere else? There was so much  gorgeous birdsong down in Rano Kau crater  yesterday. I think that place would be a botanist's dream - a micro-climate in which plants have developed with minimal human interference.

Again - how did they get there? Those mighty thick reeds that proliferate in the centre of the crater lake or those ferns with their studded leaves. Was it microsorum parksii? Often used medicinally and in fact seen in other parts of Polynesia though here on Rapa Nui it only grows in Rano Kau crater. 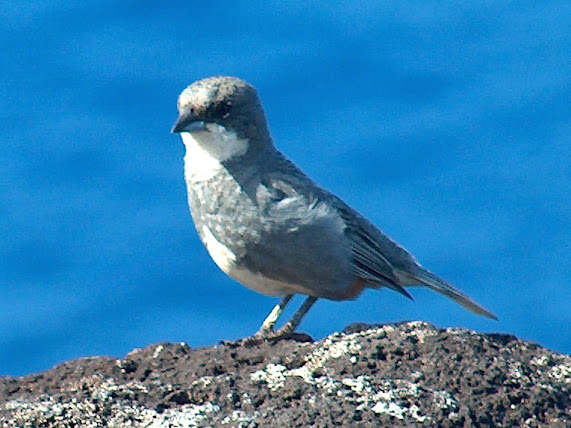 I'm now in the Bar Tavake pub on the main drag of Hanga Roa - "drag" being the operative word because the waiter/waitress is six feet tall, built like a powerful rugby fly half but with long ginger hair, excessive make-up and a flowery Tahitian style dress. Never mind - it takes all sorts.

Today - great breakfast again. I photographed  it for Trip Advisor. I was determined to be much less energetic today but ended up doing plenty of walking. I hitch-hiked to the bay known as Anakena on the northeast side of the island. First a lift to a sort of ranch entrance with a Rapa Nui man in a flatbed Mitsubishi. He said it would take a further half hour to reach Anakena on foot but fortunately an old man with his grandson stopped and took me the rest of the way.- more like a good hour's walk I would say.

At Anakena I was at first the only person there, alone with the impressive ahu with its seven moai standing tall. Nearby there was a more primitive, bulkier moai statue on a separate "ahu" (stone platform). Then a New Zealand woman appeared. She had stopped earlier for me but I had declined the lift as she was heading for Ranu Rakuru - the great crater where 95% of the moai were carved. I was surprised at how little time she must have spent there.

Having clicked several pictures of the moai, I wandered over the headland towards the neighbouring sandy bay - Ovahe.

On the way I saw a horse's corpse rotting disgustingly and I made a stone cairn topped with a bleached bone. The cliffs down to Ovahe looked treacherous so I carefully negotiated the headland before descending. There are many hawks on Rapa Nui and for the second time I was "bombed" but I made it down to the beach safely. A sign said "No Swimming" but I stripped off and plunged in anyway.

Lovely, clear water and a pleasant temperature given the rising heat of the day. Little silver fishes surrounded me at one point and floating on my back  I felt happy and at peace with the world here on this island of secrets.

As I explore, I notice evidence of many other structures - perhaps villages and small field boundaries. What might at first appear as a pile of volcanic rubble is often the ruin of a Rapa Nui house - abandoned who knows when - perhaps two or three hundred years ago. It becomes clearer that although the "moai" are the archaeological headliners that have continued to intrigue the world, there is so much more to see here - to do with daily life and the struggle to simply survive. 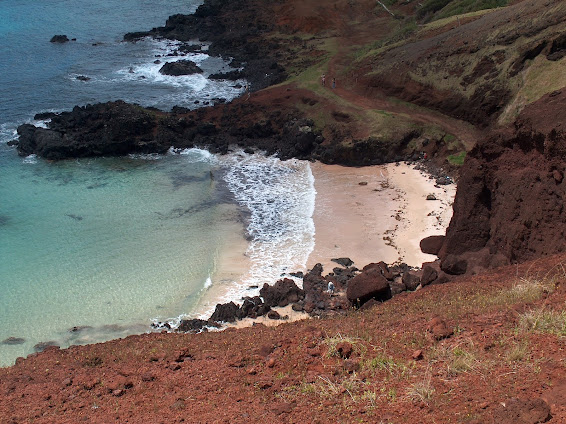