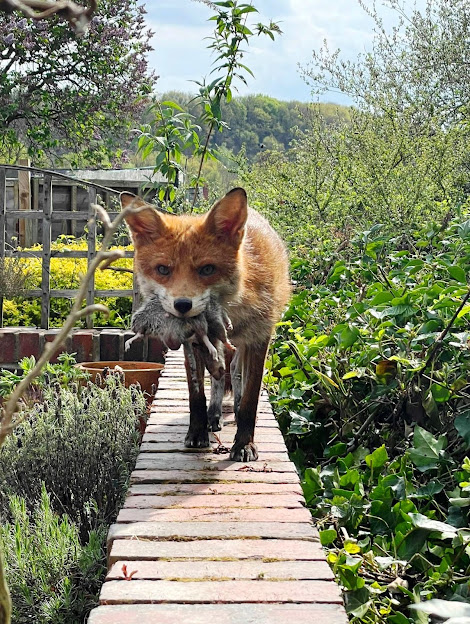 Frances, Stewart and Phoebe live a mile away from us in a rented terraced house. They have a small garden with a wall at the back. Beyond that there is a verdant slope that plunges down to the car park of the local "Home Bargains" store.  I suspect that there was a stone quarry there at some time in the past.
Recently, they spotted a fox cub in their garden and suspected it may have come from the slice of green wilderness just over the wall. Sure enough, a few minutes later, they watched a a vixen leap over the wall to retrieve her inquisitive cub.
Fast forward five days and Stewart happened to be beside the garden wall with his i-phone in hand. He snapped this amazing picture of the vixen with lunch in her mouth.  It's hard to tell what it is. Stewart and Frances think that it is an adult rat but I am not so sure.
On another occasion Stewart leaned over the wall and captured the following image of a young fox cub. 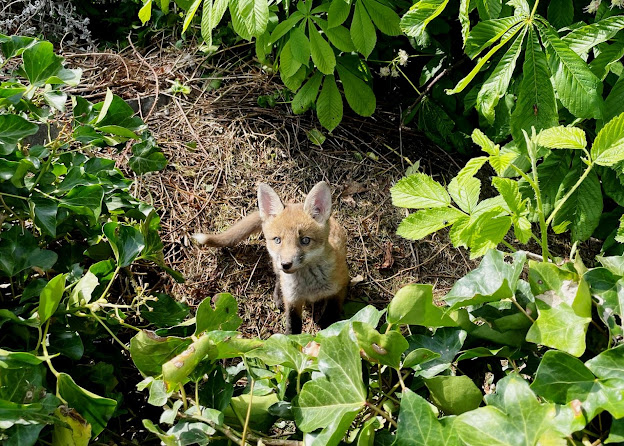 Who needs to go on an African safari or seek out penguins in Antarctica when you can watch the activities of urban foxes here in Merry Olde England? Their widespread presence in our cities is really a phenomenon of the past fifty years. Before that they were mainly country dwellers - so wary and so cunning that you hardly ever saw them.
- May 02, 2022