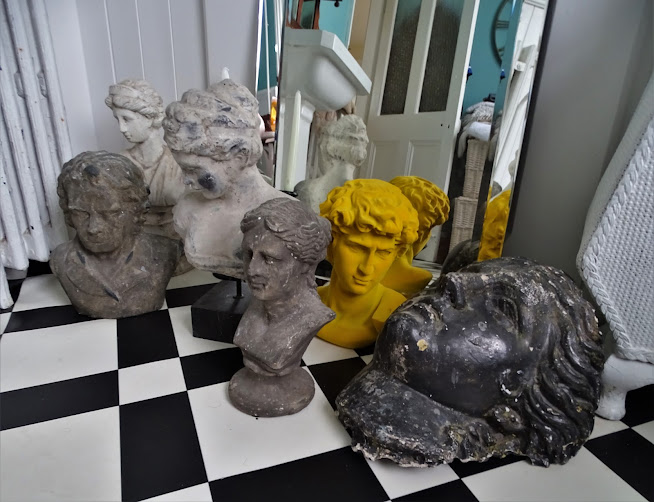 Apart from travellers and hobos, we all live in spaces. And when we live in a space, we make decisions about it - about how it will appear. Many of these decisions emanate from the sub-conscious and some are evolutionary - taking years to manifest themselves.

I guess that in places like The Hollywood Hills or Monaco or Surrey in England, some wealthy homeowners bring in interior designers to professionally style their private residences. Maybe these "homes" end up rather like pages from a Sunday magazine - more akin to luxury hotels than places of habitation. Nonetheless, even in such spaces, as time passes, the human presence will generally  intrude and reveal itself .

I snapped the top picture in the main bathroom of the house where I stayed on Friday night. It belongs to My friends Pauline and Tony. She has lived there for thirty years. Every time I have been in that house over the past six years, those heads have been there, taking up bathroom floor-space.

I have never asked Pauline about them. Such a question might appear quite nosy. However, I appreciate their presence - gathered  there like  lost figures that could not secure admission to a museum - now trapped in an early Victorian house in Beverley - on a  road that leads up to The Westwood and the racecourse.

Perhaps they have conversations in the middle of the night - comparing notes about the challenges of living without  bodies... Talking Heads.