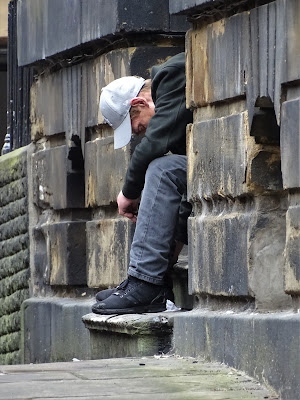 Yesterday the centre for the homeless based behind Sheffield Cathedral  were happy to accept my donations. Some day soon a bunch of lucky homeless fellows will be strolling around our city's streets wearing a selection of Yorkshire Pudding underpants. though I expect that these will be hidden from view. At least, I hope so.

Homelessness is not a massive problem in Sheffield but underthe last two Conservative governments headed by David Cameron and Theresa May, we have certainly seen a significant growth in the numbers of rough sleepers. I take my hat off to all the good citizens who give up their time to help the homeless. It can't be easy - what with associated issues such as mental ill-health, drug taking, alcoholism and violence. But there is a crying need out there.

And there but for the grace of God go any of us. It would be very easy to find oneself being thrown from the carousel of life - unable to get back on again. Mental breakdown, a broken relationship, losing one's job, drinking too much, personal financial crisis - these are just five reasons why homelessness might happen.

Of course Sheffield's homeless people all know about the support they can receive at the cathedral so in the daytime a good number of them are magnetised to the area. After I had dropped off my donation I had a bit of a wander and spotted a "down and out" fellow sitting on the doorstep of a Georgian building along an alleyway known as Wheats Lane.

Secretly, I took a couple of pictures of him then slightly nervously I approached him and asked him if he minded. He really appeared "out of it" - on a distant planet and didn't seem to get the gist of what I was saying. Thin-faced and glassy-eyed, he gave me the impression that he had been out on the streets for years. I gave him a couple of pound coins then went on my way, leaving him sitting there with the rest of his life ahead of him.

The western world is wealthy enough to make sure that all of our people have somewhere safe and warm to sleep at night. There really shouldn't be any homelessness. Who is to blame? Personally, I wouldn't say it was the homeless themselves. You may say I'm a dreamer but I'm not the only one... 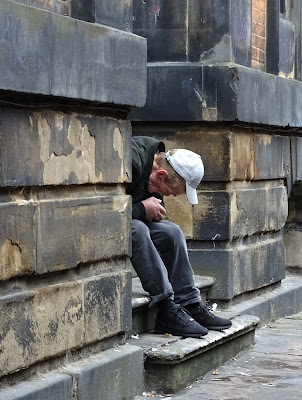