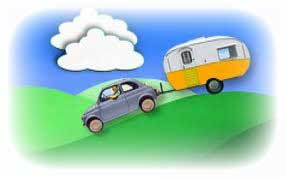 Americans call them trailers but here in Great Britain we call them caravans. My parents bought their first caravan in 1955. It was a Lynton Triumph and its walls were composed of a kind of compressed cardboard. It was a heavy, ugly beast but it gave my family the opportunity to get away on memorable holidays at little cost. I suspect that that grey beast was manufactured between the two world wars. It's possible that the army used it as a tank! Significantly, when searching for an image to accompany this blogpost, I could not locate a single picture of a Lynton Triumph.

The first caravan holidays I remember were all in this country. For three or four summers in a row, we headed down to Pentewan in Cornwall and then at Whitsuntide we laboured up to a village called Braithwaite in The Lake District. It was quite cramped in the grey beast - Mum and Dad and my three brothers and I but we were a family. We got along in spite of our differences.

They were simple, economical holidays albeit it in cramped accommodation. We never dined out. Mum gathered groceries in cardboard boxes - starting weeks before departure. In Cornwall, the biggest treat might have been  a round of "Kelly's" ice cream cones. And up in The Lake District on warm evenings we might stroll to "The Swinside Inn" where my brothers and I would drink pop (soda) and munch potato crisps while sitting on the pub wall. In those days, children were most definitely not allowed in pubs.

In 1959 or 1960, Mum and Dad plucked up the courage to take the grey tank further afield. Dad was the village headmaster and so in the summer he had the rare luxury of  six weeks' holiday. All packed up like gypsies, we journeyed down to Dover - long before this country even had motorways. An overnight stop needed to be factored in before we reached the south coast.

Then we crossed the channel to France and took our grey beast hither and thither. There were border control posts at each border - Luxembourg, Belgium, Switzerland, The Netherlands, Germany. Mum and Dad's passport pages were stamped over and over again. At border petrol stations, children could get their own pretend passports stamped and at "Agip" stations there were little free gifts too.

One summer - perhaps it was in 1963 - with September fast approaching, the groceries were running out and it was time to head back to Blighty. We were in northern France on a sunny Sunday afternoon - passing through  an unremarkable village when disaster struck.

A dirty great builders' lorry (American: truck) came careering down the main street straight towards us. He wasn't stopping and the vehicle was on the wrong side of the road. It narrowly missed our car but crashed into the cardboard caravan with an almighty thud , ripping off the entire left-hand side. The lorry ended up on its side in a ditch by a farm with the drunken driver emerging from a side window.

Concerned villagers came to our aid and later both the mayor and the local gendarmerie arrived. The lorry driver was hauled off to the nearby town to face charges.  A French farmer helped to shore up the side of the now broken caravan  Naturally, there was much form-filling to be done but we were just happy to be alive. I can still picture that lorry heading our way as though in a nightmare.

We were lucky but the old Lynton Triumph wasn't. Back in Yorkshire it had to be scrapped and the following year, as I recall, Mum and Dad invested in a secondhand Sprite Alpine caravan that had not seen war service and had walls made from sheet metal rather than compressed wood. The new caravan was not an embarrassment from a caravan museum. In fact it looked as though it even belonged in the modern world. Of course there were plenty more caravan adventures to come but fortunately they did not involve runaway lorries nor Frenchmen who had supped too much wine over their plat-du-jours.