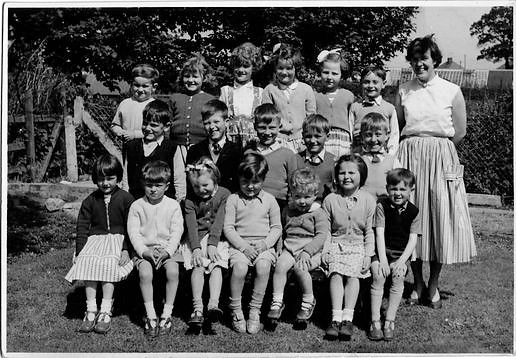 That's Miss Readhead's class circa 1959. And there we all are squinting in the sunshine. I am the boy with the big head in the middle of the front row and somehow my younger brother Simon has managed to get himself in the picture too -  even though he's only three years old and not in school yet. There are advantages to being one of the sons of a village headmaster who is also the school photographer.
I can still name a lot of those children. Behind me there's John Hugill, Richard Kilvington, John Whitehead and John Brocklebank but I  can't remember the name of the boy in the middle. Sitting next to me is Jennifer Stevenson and at the end of my row is Derek Fisher. Susan Dean, the first girl I ever kissed, is on the back row third from the left and  Michael Swan is standing next to Miss Readhead.
Every summer the school held a big internal  sports day and children were allocated to four different "houses" - Trinity, Downing, Buckingham or Wembley which was always my house and was appropriately represented by the colour red.
Following our internal sports day, selections were then made for the school team which would go on to represent our village in The Holderness Village Schools Annual Sports Day.
Our village won in 1963. There I am on the back row right behind our house captain - Susan Dean who was also in the first picture. She was a few months older than me and was probably going on to secondary school that very year. I kissed her on the back row of a bus - travelling to Whitby for our annual school trip the year before. On reflection, I was probably batting out of my league. She had grown taller than me by then.
I remember my primary school years with great affection but as the years have passed many memories have faded away and some names are lost to me. It was a privilege to grow up in a happy, law-abiding rural community in the heart of East Yorkshire with children who were not just my classmates - they were my friends. We shared the same world and lived in the same time.  Though mono-cultural, it helped to provide a splendid, solid foundation on which to build the rest of my life. 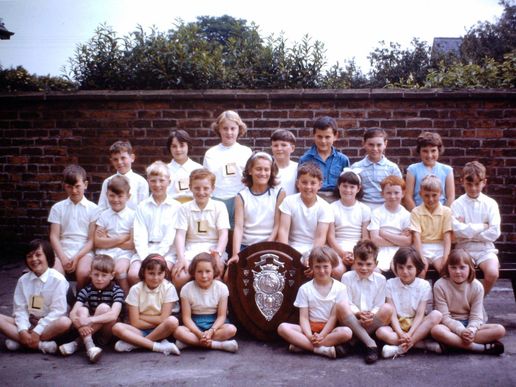