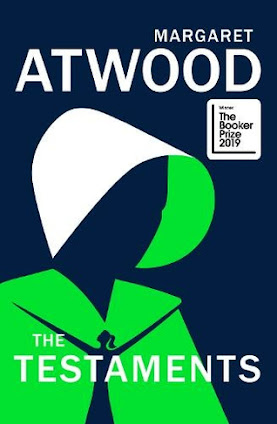 Thirty four years. That was the time gap between the publication of  Margaret Atwood's "The Handmaid's Tale" and its sequel "The Testaments". Between the contents of the two novels there is another time gap. Fifteen years.

And as we are thinking about time gaps - the space between me finishing "The Handmaid's Tale" and starting to read "The Testaments" was just one week.

"The Testaments", like the earlier novel, is set in the strange patriarchal nation state of Gilead. Women serve different functions. Some are Aunts, some are Marthas, some are Wives and selected younger women are Handmaids - designated for procreation. Gilead draws its structural guidance from "The Bible" but  interpretations are puritanical and lacking in basic  humanity.

It is never clear how big Gilead is nor how many people live there. It is located somewhere in New England and relations with nearby Canada are strained. It is extremely difficult to get in and out of Gilead though missionaries called Pearl Girls are sometimes seen on the streets of Toronto seeking new recruits.

The novel unfolds through broken testimonies that are delivered by three residents of Gilead. I found this device awkward at times because it was not always clear who was speaking - Aunt Lydia, Agnes (aka Aunt Victoria) or Nicole (aka Daisy, aka Jade). In my opinion, that could have been helpfully spelt out in the chapter headings.

What we are looking at in this novel is the beginning of the end of Gilead. Its moral certainties are eroding. Like "The Handmaid's Tale", the end section concerns an academic symposium held long after Gilead has been buried in history. Once again I found this bolted on post script odd and somewhat unnecessary. It was a distraction from  the main body of the text.

I enjoyed "The Testaments" and wanted to turn each of its four hundred pages. I finished it while sitting in Silver Clint up at Redmires Reservoirs yesterday afternoon.  There were quite a lot of other people up there - because of the schools half term and  COVID Tier 3  travel restrictions.

In an afterword, Margaret Atwood referred to some of the places in which she had been to write the novel - including  a trans-Canadian train brought to a halt by a  landslide. It's funny to think of where writers write and where readers read. We are rarely stuck in the same location throughout.

Finally, here's a choice quote from Aunt Lydia in  "The Testaments" to give you a flavour of the writing:

My larger fear: that all my efforts will prove futile, and Gilead will last for a thousand years. Most of the time, that is what it feels like here, far away from the war, in the still heart of the tornado. So peaceful, the streets; so tranquil, so orderly; yet underneath the deceptively placid surfaces, a tremor, like that near a high-voltage power line. We’re stretched thin, all of us; we vibrate; we quiver, we’re always on the alert. Reign in terror, they used to stay, but terror does not exactly reign. Instead it paralyzes. Hence the unnatural quiet.
- October 31, 2020