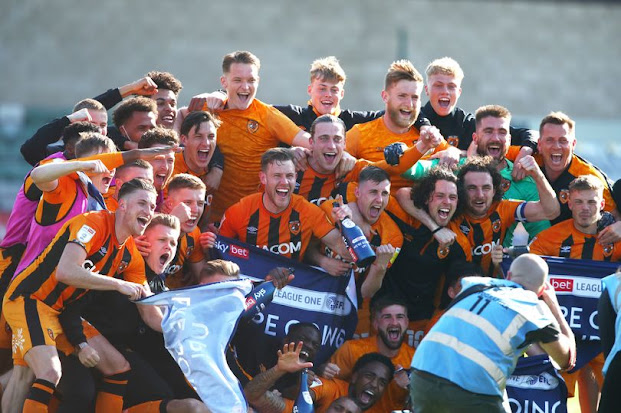 It has been a very strange football  season here in England. Thanks to coronavirus rules, games have been played in empty stadiums.

A year ago, my beloved Hull City A.F.C. were relegated from The Championship to League One. Hull City supporters far and wide felt as sick as parrots.  However, twelve months later and we are walking on air with beaming smiles. After a great season in which The Tigers have won twenty six games and scored seventy seven goals, we met fellow promotion contenders Lincoln City at Sincil Bank yesterday and beat them by two goals to one.

I have been supporting Hull City for close on sixty years. Lord knows how much money, time and emotional energy I have spent upon them. So many ups and so many downs. The progress of my club matters a great deal to me. It has been very different from supporting Liverpool or Chelsea or Manchester United. In comparison, being a fan of such clubs is so easy.

But Hull City, Scunthorpe United, Tranmere Rovers, Rotherham United, Sunderland, Reading, Bristol Rovers... - fans of clubs like these know what it means to support a proper team - taking the rough with the smooth, remaining loyal in spite of everything.

One of my biggest thrills in life is to see The Tigers score winning goals. In those orgasmic moments, the troubles of ordinary life completely disappear. The exquisite joy releases me. There is no time for dissection, no time for pondering  - the joy is everything. If you have ever supported a football team you will understand what I mean.

Congratulations to our current manager Grant McCann, his support staff and all the lads who donned the amber and black shirt this season. Maybe next season I will get to see some games back up in The Championship.  Up The Tigers!