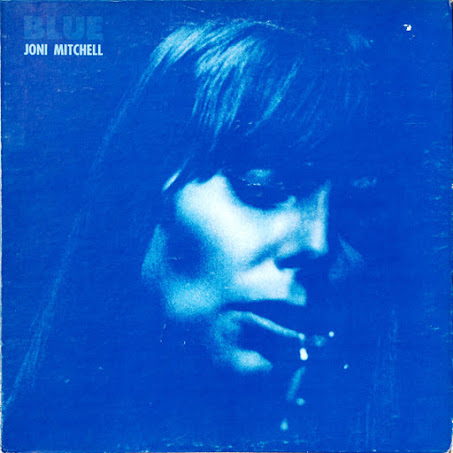 It's fifty years since Joni Mitchell released her most marvellous album - "Blue". I bought it as soon as it came out and listened to it over and over again. It was astonishing because of  its lyrical beauty and its emotional openness. Everything poured out of her. There were no reins to hold it back.

It was more than poetry. The melodies and the simple musical backing lifted it higher. In later years, I discovered that the songs reference Joni's love affairs with Graham Nash and James Taylor and the loss of her daughter Kelly who was fostered soon after her birth when Joni was an impoverished art student.

In 1971, none of that mattered to me because I found the songs awesome in their own right. I didn't  need to know exactly what had sparked them. She sang,:-

On the back of a cartoon coaster
In the blue TV screen light
I drew a map of Canada
Oh, Canada
With your face sketched on it twice
The album  was revelatory and true and it was speaking to me directly as I approached my eighteenth birthday. I always loved lyrics - from Donovan to Dylan and from Leonard Cohen to The Incredible String Band - but somehow "Blue" connected with me lyrically as no album had ever done before. Joni was so vulnerable and yet so strong to tell her tales of love like this.  Incredibly, she found the words to say it all.
These were and remain the songs on "Blue":
"All I Want", "My Old Man",  "Carey", "Little Green", "Blue", California", "This Flight Tonight", River", "A Case of You" and "The Last Time I Saw Richard". I would not even venture to say which song I loved the most. They were all so good.
Like all great Art,  the album "Blue" was all about what it means to be human. Fifty years later that statement remains as true as it was in the beginning. Thank you Joni. What more can I say?
- June 19, 2021