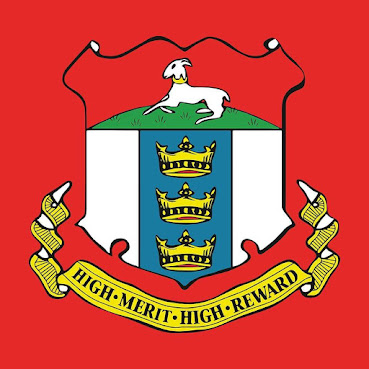 Arguably, the notion that life is a straight journey from A to B is illusory. As we live, our thoughts wander this way and that. We spend a vast amount of thinking time processing past events and reflecting upon  our journeys. In the nineteen sixties, a documentary film was made about Bob Dylan's 1965 tour of England  It was called, "Don't Look Back" but in reality we all "look back". It happens every day.

The preamble above simply foreshadows the main content of this blogpost - a memory. I picked it from the shelves of my personal library of memories that is of course embedded in my temporal lobe.

It is one morning in September 1965 and I am riding on a double decker bus from my East Yorkshire village to the great metropolis of  Kingston-upon-Hull. I am excited and not a little nervous because this is going to be the first day of my secondary education.

Back in April of that year, I had passed the critical "eleven plus" examination with flying colours. My score had been so high that I had won a free scholarship to Hull's most prestigious secondary school - Hymers College. Most boys' families paid handsomely for their elitist education at Hymers but each year a few boys, like me, received the same service free of charge.

I was wearing a grey suit with shorts rather than long trousers. There was a red and black cap on my head and knee stockings on my feet. I had a brand new leather satchel containing such things as a pencil case and a dictionary, leaving plenty of space for the text and exercise books that would soon fill it.

It was thirteen miles into the city and when I left the bus at Paragon Station, I had to sprint for a corporation bus that would take me the extra mile down Spring Bank to Hymers. I felt very much alone and did not know one other boy in the school.

I was placed in a form group called Lower 3A. Our form teacher was Mr Gale, nicknamed Windy Gale for obvious reasons. He sucked menthol sweets and wore a black academic gown. He taught Latin.

That morning my mind was in a whirl as we followed the timetable. Most of the other boys knew each other well for they had attended the school's junior section together from the age of five. I kind of linked up with a pale lad called Andrew Wallis or simply "Wallis" as he was always known in classrooms. He was also a scholarship boy and he lived close to  Craven Park which was the former home ground of Hull Kingston Rovers rugby league club.

After lunch, Wallis and I were queuing up with the others outside our form room waiting for Windy to arrive. The fee-paying boys tended not to speak like proper Yorkshire lads. That was one discovery I had made that morning. Previously, I had imagined that I spoke English properly having never before been exposed to received pronunciation or Queen's English accents in real life. To my posh classmates, I probably sounded like a farm yokel.

Ahead of me in  the queue, a tall blonde lad was imitating my accent as his willing audience laughed uproariously. He turned to me with mockery in his eyes, still putting on a broad East Yorkshire accent. I was silent but boiling up inside with a rage I  did not recognise. Then he started to push my shoulder with  his audience still guffawing.

It was at that moment that I exploded. I punched him as hard as I could in the face and he staggered back somehow falling over in the process. And then I was upon him, my fists flailing. He had been the toughest nut in the junior school but he was at my mercy.

Then someone said, "Mr Gale's coming!" so we jumped up, our uniforms dishevelled and the tall boy now blubbering with tears. As he took the register, Windy never twigged that there had just been a fight. After it, none of my classmates ever mimicked my accent again . I think they were slightly in awe of me. Later,  the big blonde lad and I became the best of friends. He was called Foster though he did have a first name too. It was Andrew - just like my very first secondary school chum - Wallis.

Lots of things get forgotten and never reach the library of memories but after fifty six years I remember the events I have just related very vividly indeed. For various reasons, it was a seminal moment in my life, a turning point and somehow the end of innocence. Nothing was ever quite the same after that.