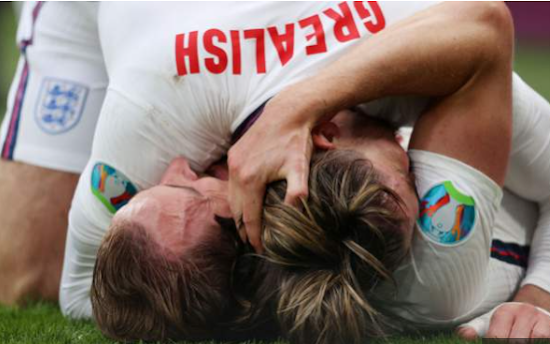 Grealish and Kane  after the second goal

4.45pm - Just fifteen minutes to kick-off. The teams have been announced. It's amazing that Aston Villa playmaker Jack Grealish has not made the starting eleven  - nor has Manchester City's Phil Foden but I am pleased to see Arsenal's nineteen year old Bukayo Saka on the team sheet. He played so well against the Czech Republic in the group stage of the tournament. As the day has progressed, I have felt a growing nervous energy while just pottering around in the garden. Last night, as I was drinking beer with the lads up at "The Hammer" I predicted a two-nil victory for England. Hope I am right. Come on England!

4.55pm - The teams are out now. Wembley is noisy though there's only half a crowd there because of COVID restrictions. The teams are lining up. The German team are singing "Das Lied der Deutschen"... there is a lot of unsporting booing... and now "God Save The Queen". All the lads are singing. It's spine-tingling. I will write again at half time.

5.47pm - It's halftime and the score is nil-nil. Quite an even first half but in a few instances England have looked threatening. Saka is playing well but our goalscoring captain Harry Kane continues to have an unremarkable tournament. Germany's Timo Werner probably had the best chance but his attack was snuffed out by our goalkeeper - Sunderland-born Jordan Pickford. Great save! 53% possession to England. Both teams have had three shots. Even stevens but England have some fire in their bellies today. I remain hopeful but a bit worried that Kalvin Phillips might get himself sent off with a second yellow card. That would change everything.

6.50pm - The final whistle has just been blown. We have won! We have won! By two goals to nil. Now who predicted that? Goals from Raheem Sterling and Harry Kane who headed in a cross from our charismatic  substitute - Jack Grealish. As I watch our television, the England fans are singing, "It's Coming Home! Football's Coming Home!" They played like a proper team. Together for England! Onwards to the next game - Sweden or Ukraine. Surely...surely! Come on England! 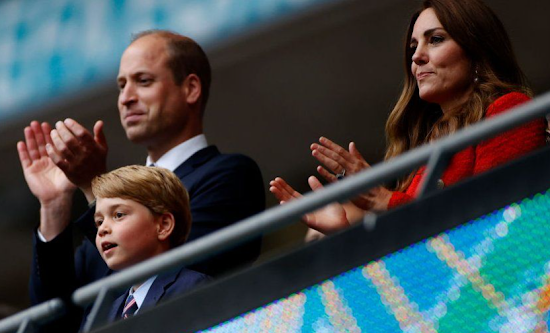 Prince William. Prince George and the Duchess of Cambridge were in the crowd
- June 29, 2021