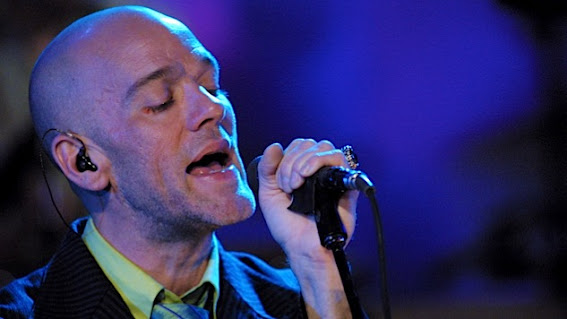 Like many people, the music that still haunts me is the music of my youth. In a way it is as if my musical tastes are more or less frozen in time. I still like Bob Dylan and Joni Mitchell, Free and Jackson Browne, The Incredible String Band and Leonard Cohen. I associate much of "my" music with the time before adult responsibilities arrived - climbing up onto the conveyor belt of work and paying a mortgage and marriage and children.

As a consequence, I kind of missed out on a lot of great music that came along afterwards. Recently, more or less by accident, I have been paying more attention to the music of R.E.M. . For instance, there was a late night programme on the television called "R.E.M. at the BBC" and I was entranced by it.

Formed in 1980 at university in Georgia, they were a very tight band. They sought to be true to themselves and to their ideas. As most readers will know, the frontman was a wiry, elf-like fellow called Michael Stipe and as well as singing the songs he was the lyricist.  Many of his ideas were original and poetic. There was a mysterious, plaintive quality about a lot of his lines and on stage he would often appear to live them as if  mesmerised, reaching for something higher than ordinary life. It is said that Stipe came up with the band's strange  name which he spotted randomly in a dictionary.

Michael Stipe is 61 years old now. R.E.M. split up in 2011 and it is unlikely that they will ever be heard live again. If I had been ten years younger they would surely been right up there on my favourites list but I kind of missed them. Behind them the band left a long history of touring the world, wowing audiences everywhere and of course they left a catalogue of  memorable songs, like these three:-