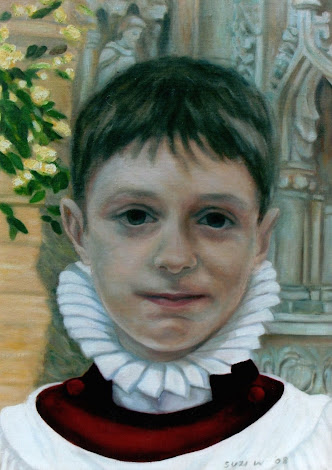 Lying abed this morning with BBC Radio 4 playing on our radio alarm clock, vague memories of when I was a choirboy came to the surface of my mind. On Sunday mornings, Radio 4 focuses upon religion and there are church services complete with hymns, sermons and prayers. Memories returned like flotsam on waves.

I was a choirboy from the age of ten to fourteen. I can't remember how I ended up in our village church choir but I have always loved singing and my father was a church warden and regular churchgoer so that may explain it.

As a choirboy, I had to attend choir practice every Friday evening ready for  Sunday. When "The Sabbath" arrived there were two services. One began at ten in the morning and the other was I believe at six thirty in the evening.

In those four years, several hymns became very familiar  and I knew some of them by heart. Even today I can still sing whole verses from memory. One of my favourites was "Ye Holy Angels Bright" written by Richard Baxter in 1681 but sung to an even older tune called "Darwall":-

Ye holy angels bright,
Who wait at God's right hand,
Or through the realms of light
Fly at your Lord's command,
Assist our song,
For else the theme
Too high doth seem
For mortal tongue
The hymns were filled with archaic language and strange notions - such as angels flying through "realms of light" like an angelic air force commanded by their omnipotent leader - the unseen "God" figure who seemed to get everywhere. The echoes of those hymns with their unmodern English have remained with me and have certainly influenced my appreciation of language.
As a choirboy, I had to wear a ridiculous outfit and I am very pleased that there are no surviving photographs of me in this garb. First there was a long black cassock that reached the floor and was buttoned up the front. Over this you wore a white surplus - a loose kind of smock that reached just below the waist and had baggy sleeves. Last there was the white ruff which I wore round my neck. Our outfits hung on pegs in the vestry and I have no idea if they were ever laundered. I guess they must have been once in a while.
Being a choirboy was not just about the singing. There were interminable prayers and even longer sermons to endure - delivered by vicars and canons whose voices droned on and on from the stone pulpit. Would they ever end? You would think that religious belief would instil believers' hearts with animated, radiating  joy but those prayers and those sermons were so tiresome, so dull, so very unconvincing. To me they added weight to my growing but unspoken belief that it was all one enormous confidence trick, played out over centuries of tomfoolery and communal arm-twisting.
Just as I don't recall how I became a choirboy, I don't remember how I extracted  myself from the role. By fourteen, my atheism was now pretty well-formed and I had for example spoken about it with my mother who was also unconvinced by all the religious rigmarole though she kept this quiet for my father's sake.
No longer would I sing in the village church where I was christened in the springtime of 1954 and where I delivered my mother's funeral eulogy in  September 2007. No more a choirboy was I, but even now the hymns still echo and my interest in church buildings and the impact of Christianity upon this kingdom persists. You can take the boy out of the choir but you can't take the choir out of the boy.
- June 06, 2021