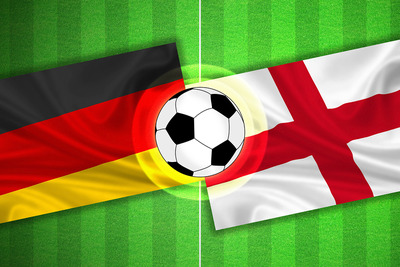 In international football (American: soccer), there's a big tournament going on at the moment. It's the UEFA European Championship Finals.

We are presently through the group stages and into the knockout section of the competition. For example, last evening Belgium knocked Portugal out with a single goal scored by Thorgan Hazard. Belgium are currently ranked number one in the world but back in 2016,Portugal were the last winners of the tournament. Last night's game was played in Seville, Spain.

Here in Merry Olde England we await Tuesday evening with a mixture of hope and trepidation. Down at Wembley Stadium in London, England will be taking on Germany. We have a talented young team in which the chemistry hasn't yet fully gelled . Germany have a more experienced squad with some exciting young players. I am sorry to say that when the two teams meet, Germany have an annoying habit of  gaining the upperhand. In history, the two countries have met on thirty two occasions with Germany winning fifteen times, England thirteen times and four draws between them.

Surely this time, England will do it. English football supporters in the home country and around the world will be glued to their television screens when the match kicks off. We will be urging our lads on but well aware of the potential hurt that defeat would bring. To thousands, perhaps millions of football supporters around the world, our beautiful game matters more than religion. COME ON ENGLAND!

But...yes there has to be a but - the world is still in the grip of a deadly pandemic.  I am sure that I am not alone in feeling rather puzzled about the fact that the tournament has gone ahead. I feel the same way about other big sporting events such as The Olympic Games in Japan. Should this really be happening? Virologically speaking, is it justifiable?

So many players,  coaching  and medical staff flying around with V.I.P's, media folk and thousands of supporters. In Budapest, Hungary UEFA football matches have attracted crowds of over 50,000 on four separate occasions. That cannot be right especially when you consider that Hungary's COVID death toll is bigger than in almost any other European country - 3112 deaths per million.

I love football and want to see England victorious tomorrow night but when you stand back and consider what the coronavirus is still doing to humans around the world, you have to doubt the perspicacity of the decision makers who have allowed the UEFA Championship Finals to happen.