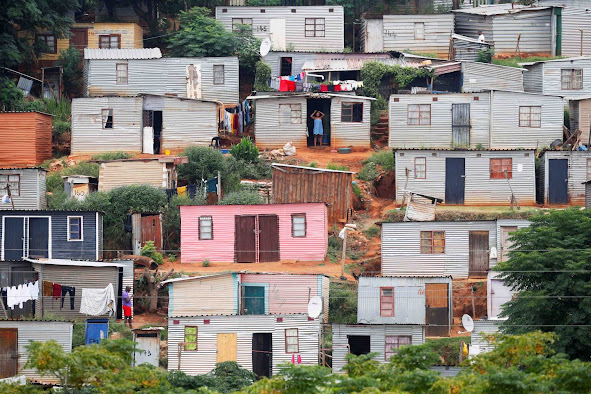 Last night my memory was jogged and I was transported back to South Africa - October 2003.

Shirley and I had met up with friends Linda and Ian in "The Greystones" for an evening of beer and conversation. We were in an alcove room left of the main bar. I noticed that there were two women at a table  in the bay window. They had a dog with them.

After an hour I put my mask on to visit the lavatory and when I returned the dog started barking like The Hound of the Baskervilles. It was then that I recognised the dog's owner though I could not remember her name. Like me. she was in a party of Sheffield teachers who visited South Africa  almost eighteen years ago.

She apologised about the dog's barking and we exchanged a few pleasantries before she and her friend left the pub. She said that she recognised me and then it clicked - South Africa 2003.

There must have been a development grant from somewhere. We were in South Africa on some sort of fact finding mission though to this day I have no idea how it was meant to impact upon our work back in Sheffield secondary schools.

I related a story to Shirley, Linda and Ian about the woman with the dog. It happened at Ogwini School in the middle of the vast Umlazi township on the edge of Durban. That impoverished estate is to Durban what Soweto is to Johannesburg. Sprawling, dirt poor and often desperate.

She was an I.T. and media teacher.  One day she thought it would be a really cool idea to lend a costly video camera to two boys - telling them to walk around the school grounds and gather some footage.

Imagine that  - teenage South African boys from tin shack homes entrusted with a camera that was worth an absolute  fortune relative to Umlazi's median household income. The temptation was too much.

They left the school grounds and took the camera home before returning, claiming that it had been stolen from them.

The wily headmaster was mortified but immediately saw through the boys' ruse. He quizzed them and discovered the truth then he took the main perpetrator home and spoke to his grandmother. The shock and the shame combined to give the old woman a heart attack whereupon she collapsed and died.

The headmaster retrieved the precious camera but there was nothing he could do to restore the grandmother's life. To this day, I am not sure that the woman with the barking dog even knows the full repercussions of what she did that day. Putting such temptation in the hands of the two boys was a very stupid thing to do and the unseen outcome was not only fatal but tragic as well.

I expect that the grandmother was buried or cremated. In contrast, the woman with the barking dog went on to become an I.T. adviser  for the local education authority. Such a cushy number.