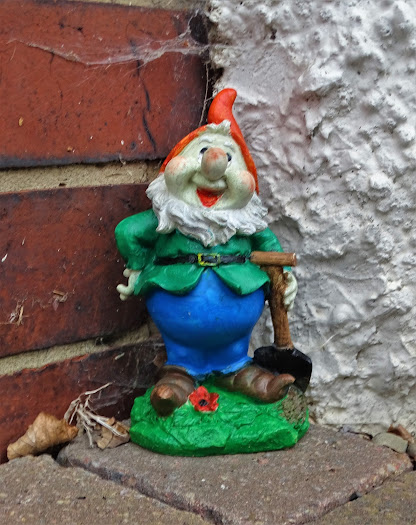 Who needs an electric burglar alarm when you can instead employ a garden gnome?

Our home has been protected for several years by an eight inch gnome called Lars. He arrived from Liechtenstein one September morning in 2009. There was a tiny tapping on our front door and I opened it to find no one there until I looked down and there was Lars with his spade. He was looking for work.

Nowadays, he stands close to the front door which is where he has been  for eleven and a half years night and day. He has successfully deterred all intruders. Lars doesn't ask for much - an occasional "Malteser" on top of his regular gnome food* and a couple of thimbles of Tetley's bitter on a Saturday night.

Last week, I noticed that Lars's colours had more or less faded away. He was bleached by the sun and looked like a very small snowman so I decided to get out my oil paints to spruce him up. He was perfectly patient as I applied the paint.

After forty minutes he was as good as new and ready to return to duty. In contrast, this morning a neighbour's electric house alarm was wailing away for almost an hour. If this had been an American city I would have gone to my gun cabinet to grab a rifle in order to blast that bloody alarm to smithereens. As I say, a garden gnome does a much better security job without annoying the neighbours.

In the back garden we have other gnomes who may also be crying out for paint jobs. Trouble is, I can't hear them.